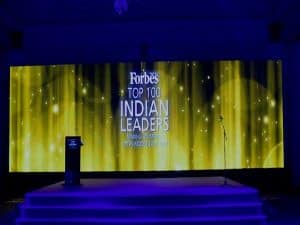 Forbes Middle East has unveiled its 7th annual ranking of the Middle East’s most successful and influential Indian leaders. For 2019, the ranking reveals the pioneers, executives and CFOs that have had the biggest impact in the region through their tireless work and phenomenal businesses, which have helped build the Arab world into the metropolis it is today.

The ranking was released at a glittering gala at the Palazzo Versace, Dubai, which hosted His Highness Sheikh Mohammed bin Maktoum bin Juma Al Maktoum, His Excellency Navdeep Singh Suri, Ambassador of India to the U.A.E., and over 200 Indian leaders and special guests.

Speaking at the event, His Excellency, Navdeep Singh Suri, said that the annual celebration was one he would never miss as it brings together those individuals whose contributions should be recognized because of the wealth and jobs they have created, the opportunities they seized thanks to the beneficial business environment created by the leaders of the Gulf countries, and the example that they have set for so many others.

The ambassador spoke proudly of the recent growth of India’s economy. The country has jumped 65 places in three years on the World Bank’s Ease of Doing Business ranking, from 139 to 37. He encouraged the audience to continue to put their faith and investment in India.

“We have a government committed to addressing challenges and to making it generally easier for all of you to experience a better business environment,” he said. “Take advantage of the new India, there is a change happening before your eyes. Take a fresh look and be the bridge between India and the UAE that you have always been, as communities but now also in business.”

Honoring these Indian leaders’ contribution to the region, Forbes Middle East’s list of the Top 100 Indian Leaders Making An Impact In The Middle East consists of 60 Indian Pioneers and 40 Indian Executives. For the first time, it has also highlighted the top 10 Indian CFOs who are at the helm of some of the largest companies’ finances. The complete lists can be viewed at: www.forbesmiddleeast.com.