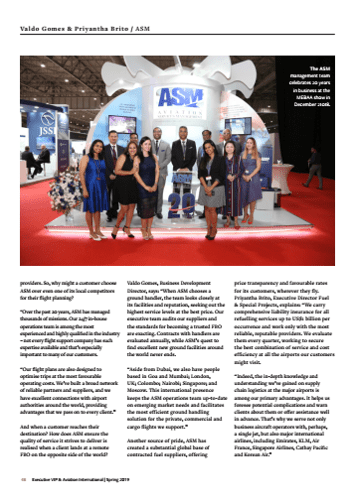 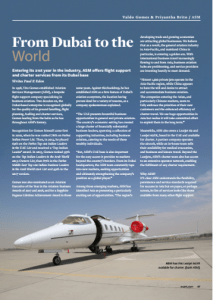 Entering its 21st year in the industry, ASM offers flight support and charter services from its Dubai base.

In 1998, Vito Gomes established Aviation Services Management (ASM), a bespoke flight support company specialising in business aviation. Two decades on, the Dubai-based enterprise is recognised globally for the quality of its ground handling, flight planning, fuelling and charter services, Gomes leading from the helm as he has throughout ASM’s history. 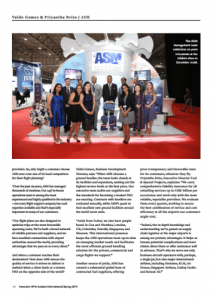 Gomes was also nominated as an Aviation Executive of the Year in the Aviation Business Awards of 2017 and 2018, and for a Sapphire Pegasus Lifetime Achievement Award in those same years. Against this backdrop, he has established ASM as a firm feature of Dubai’s aviation ecosystem, the location having proven ideal for a variety of reasons, as a company spokeswoman explained.

“The UAE presents bountiful business opportunities in general and private aviation. The country’s economic setting has created a large cluster of financially substantial business leaders, spawning a collection of supporting industries, including business aviation, catering to the needs of these wealthy individuals.

“But, ASM’s UAE base is also important for the easy access it provides to markets beyond the country’s borders. From its Dubai headquarters, the ASM team constantly taps into new markets, seeking opportunities and ultimately strengthening the company’s position as a global player.”

Among those emerging markets, ASM has identified Asia as presenting a particularly exciting set of opportunities. “The region’s developing trade and growing economies are attracting global businesses. We believe that as a result, the general aviation industry in Asia Pacific, and mainland China in particular, is entering a golden era. With international business travel increasingly flowing to and from Asia, business aviation hubs are proliferating, and service providers are investing heavily to meet demand.

“Almost 1,500 private jets are operating in the Asia Pacific region, while China appears to have the will and desire to attract and accommodate business aviation. The companies entering the Asian, and particularly Chinese markets, seem to fully embrace the priorities of their new customers and the enhanced efficiency of charter travel. We see huge opportunities in Asia but realise it will take committed effort to exploit them in the long term.”

It’s clear ASM has understood the flexibility, persistence and service standards required for success in Asia but on paper, or perhaps screen, its list of services looks like those available from many other flight support providers. So, why might a customer choose ASM over even one of its local competitors for their flight planning?

“Over the past 20 years, ASM has managed thousands of missions. Our 24/7 in-house operations team is among the most experienced and highly qualified in the industry – not every flight support company has such expertise available and that’s especially important to many of our customers.

“Our flight plans are also designed to optimise trips at the most favourable operating costs. We’ve built a broad network of reliable partners and suppliers, and we have excellent connections with airport authorities around the world, providing advantages that we pass on to every client.”

And when a customer reaches their destination? How does ASM ensure the quality of service it strives to deliver is realised when a client lands at a remote FBO on the opposite side of the world? “When ASM chooses a ground handler, the team looks closely at its facilities and reputation, seeking out the highest service levels at the best price. Our executive team audits our suppliers and the standards for becoming a trusted FBO are exacting. Contracts with handlers are evaluated annually, while ASM’s quest to find excellent new facilities and ground facilities around the world never ends.

“Aside from Dubai, we also have people based in Goa and Mumbai; London, UK; Colombo; Nairobi; Singapore; and Moscow. This international presence keeps the ASM operations team up-to-date on emerging market needs and facilitates the most efficient ground handling solution for the private, commercial and cargo flights that we support.”

Another source of pride, ASM has created a substantial global base of contracted fuel suppliers, offering price transparency and favourable rates for its clients. “We carry comprehensive liability insurance for all refuelling services up to US$1 billion per occurrence and work only with the most reliable, reputable providers. We evaluate them every quarter, working to secure the best combination of service and cost efficiency at all the airports our customers might visit.

“Indeed, the in-depth knowledge and understanding we’ve gained on supply chain logistics at the major airports is among our primary advantages. It helps us foresee potential complications and warn or assist clients well in advance. That’s why we serve not only business aircraft operators with, perhaps, a single jet, but also major international airlines, including Emirates, KLM, Air France, Singapore Airlines, Cathay Pacific and Korean Air.”

Vito Gomes  The founder and CEO of Aviation Services Management. Commentary given during the interview to EVA Magazine,  April 2019.

Article published in April 2019 issue and available at: